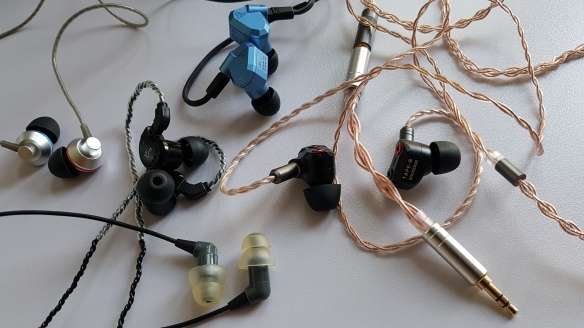 TLDR: The Tape delivered absolutely stunning sound for the 3 months and maybe 100 hours listening before the right earphone volume dropped significantly. The failure may be related to the slight suction effect caused by using better fitting tips. My original review is below. As far as I know the Shuoer Tape Pro uses the same drivers (in a different housing) so comments about how they fare long term welcomed (here or against my YouTube video below).
Several reviewers have described these as having a V-shaped sound however I don’t experience the mid recession they describe.

I bought my Tapes early July 2020 and using the supplied large black plastic tips the Samsung Adapt Sound equalisation required (on my antique S7 phone) shows them to be slightly mid-forward i.e. quite the opposite of V-shaped so not sure whether they have been revised. Mine have SHUOER02 printed on the underside however some photos, such as those from the Headphonia review, show SHUOER09.

When used through a cheap Bluetooth 4.1 mmcx cable they measured absolutely flat (this eBay adapter provided the convenience to skip tracks, change volume and pause but the sound quality went down a notch and suffered dropouts and poor 2h battery life so I reverted to the supplied cable).

Apart from this equalisation required (to bring up the bass and high treble to the same level as the mids) and the cable which is not to my taste (I’d prefer straight v braided, inline controls to skip tracks and change volume and no balanced adapter) I am hard pressed to identify flaws in them – though they don’t gloss over sibilance in recordings e.g. the line “give ourselves one more chance” in Queen/Bowie’s ‘Under Pressure’.

I have a lot of audio from HD600 (natural vocals) to Amperior (impactful bass) to Genelec studio monitors with sub (great clarity) and am very impressed with the Tape though would ideally not need to equalise them (though haven’t tried foam tips). That said the equalisation I apply is slight and even without any equalisation whatsoever nothing jars.

I have discovered on the forums a lot of earphones over the years (no pun intended) from the stellar bargain Samusung EHS64 to warm and sweet Sony MH1C to transparent but variously compromised Hifiman RE0, Fiio EX1 (Dunu Titan 1), TRN V80, KZ ZS5 v1 and Etymotic MK5.

I’m not often sufficiently moved by an item to write a review but having used these for 2 months now I know that even well after the honeymoon period has ended these beauties are keepers. Their honesty means my music moves me and while I still use Bluetooth TWS sets like Galaxy buds for convenience, these are the earphones I turn to when I want the most true and emotional experience.

While the brand name may look like the stereotypical Chinese cheap copy of the renowned Shure, there is nothing glib about these earphones, though a touch of the garish.

Good job Shuoer. Supply a less garish simple straight cable with inline controls and a few more tip styles to ensure good fit and this could be as close to top tier for most as makes no difference.

To hear these earphones for yourself why not check out my brief review and sound test on YouTube.

More cheap truths including about the biochemistry of losing fat on my blog http://gichow.com